The Rule of Law vs. “Calvinball”

I’ve been swamped all week, so I’m re-posting an item from last summer, back before our readership really started to climb. And given much of the news we’ve been seeing lately, this post is even more applicable now than it was then.

Please note its author is Dapper Dan, a buddy of ours who blogs over at Principles, Not Men. Any and all kudos should be directed to him.

I’ll simply mention what I said six months ago: anytime you can combine Hayek, the Federalist Papers AND ‘Calvin & Hobbes‘ into a single, highly cogent post, you’re doing somethin’ right.

The term “Rule of Law” is an important term in political dialogue.  Accepting this belief or not will determine where you stand on many, if not most, of the issues.

In The Road to Serfdom, F.A. Hayek describes it thus:

Stripped of all technicalities, this means that government in all its actions is bound by rules fixed and announced beforehand—rules which make it possible to foresee with fair certainty how the authority will use its coercive powers in given circumstances and to plan one’s individual affairs on the basis of this knowledge….under the Rule of Law the government is prevented from stultifying individual efforts by ad hoc action.  Within the known rules of the game the individual is free to pursue his personal ends and desires, certain that the powers of government will not be used deliberately to frustrate his efforts.

Basically, the decision is between “Rule and Law” and “arbitrary government” where the rules keep changing.  Hayek then uses an analogy of highways.

The difference between the two kinds of rules is the same as that between laying down a Rule of the Road, as in the Highway Code, and ordering people where to go; or better still, between providing signposts and commanding people which road to take.

My own view of the difference is like between the NFL and Calvinball.  If you are not familiar with the comic cartoon ‘Calvin and Hobbes‘, the boy Calvin and his imaginary tiger Hobbes would play a game called Calvinball.  In this game they would randomly shout out “rules” and the other was required to comply.  Naturally, the rules benefited the one who made them up and hurt the opposition.  It was absolute chaos.  This would represent arbitrary government.  It doesn’t take much effort to see how unjust this is.

Now the NFL is like the Rule of Law.  The players all go in knowing the rules of the game ahead of time and then form their strategies based around those rules.  Both sides play by the same rules and violators are penalized.  At the end, whoever wins, wins.  If the refs are bribed to make bad calls against a certain team, we would all see that justice was being perverted because favoritism is being shown.  However, if the game is played fairly, even if your team loses you can say it was a “good game” and justice was done. 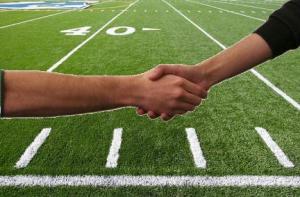 Conversely, tyranny thrives in arbitrary government.  If it doesn’t like some group of people (whether it’s based on class, race, or whatever) it can randomly create laws that penalize or hurt that group of people.  And here is where the analogy of Calvinball breaks down, because the other side cannot make laws too.

They are left to the mercy of the coercive powers of the government.

Likewise, government can make laws that will benefit some at the expense of others.  It may do this through bailouts because a corporation is “too big to fail” or they may do this in order to gain votes from a certain group of people, such as gaining black votes through affirmative action laws.  Whatever the reason, it’s obvious that they are playing “Calvinball” and justice is being perverted.

They are resolutely helping one group at the expense of the other.

The Founders saw this problem.  James Madison in Federalist 62 said:

The internal effects of a mutable policy are still more calamitous. It poisons the blessings of liberty itself. It will be of little avail to the people that the laws are made by men of their own choice if the laws be so voluminous that they cannot be read, or so incoherent that they cannot be understood; if they be repealed or revised before they are promulgated, or undergo such incessant changes that no man, who knows what the law is today, can guess what it will be tomorrow. Law is defined to be a rule of action; but how can that be a rule, which is little known, and less fixed?

The law should be equally applied to everyone, even members of government.  That is why it is so unjust for Congress to create a massive health care bill, force it down the throats of the American people, and then exempt themselves from it.

To be sure, there are such things as immoral laws.  But those laws are the ones that treat some differently than others.  If the law was truly equally applied to ALL members of society, even the government bureaucrats, those immoral laws would largely, if not completely, disappear.

It doesn’t take much effort to see how far down the Calvinball-road America has already come.  Just think how often we hear, “Let’s just get to the next election.  If we can survive that long, maybe we can get the right people in and they can get such-and-such a law passed or such-and-such a law repealed.”

When we’re saying things like that, we’re already way too far down the Road to Serfdom. 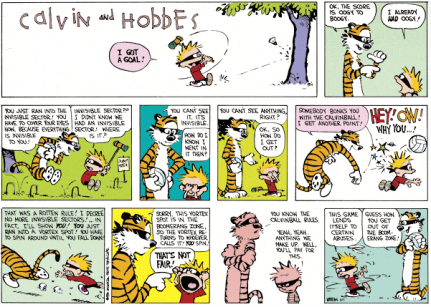 4 responses to “The Rule of Law vs. “Calvinball””