Meditation for the Fourth Week in Advent 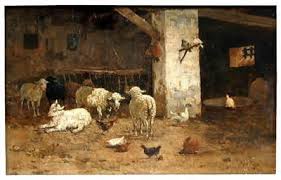 “Soon–please, Father, soon,” she pants, shifting her weight on the blanket-draped straw, trying to outwait the pains. This wave over, she lies back, her breathing heavier now than the beasts’, hulking in the gloomy corners.

At least it’s quiet here, she thinks, grateful for relief from the bustling, crowded street…the noise has faded with the end of day, and is more muffled here through the sturdy stable walls. Joseph did his best, gathering blankets, linens, a clay lamp and oil–though it cost them all the little store of coin they had. A servant kindly brought them bread and wine. It will be their last meal before…he comes.  Bread stays their hunger, and wine dims her pain a bit, so she can sleep.

Waking as midnight deepens, far along in pressing, urgent pain, she stares up at the dusty beams.  The lamp’s weak glimmer throws up just enough pale rays to cast odd, wavering shadows, and to make the cattle monstrous.  Try as she might to make no sound, a groan escapes–Joseph wakes at once, attentive, though it isn’t nearly time yet.

Now, however, when she shuts her eyes she is aware of something that approaches–not a shape exactly…more a light.   It’s far away, but she can sense it speeding toward her, and her heartbeat quickens.  Gasping now, with single-minded focus she fixes her eyes on the lamp flame, waiting for what she knows will come.  Now, in the breathy stillness, when she groans again, it is as if the whole world groans with her in eagerness, waiting with her and working, leaning toward that long-awaited light.

One response to “Meditation for the Fourth Week in Advent”