New, unedited video of Unions’ assault on Steven Crowder. Will we see this on the Nightly Newscasts NOW?

Remember the “Peaceful Unions” who demonstrated their peace-loving peacefulness up in Michigan by cracking a political opponent in the face? 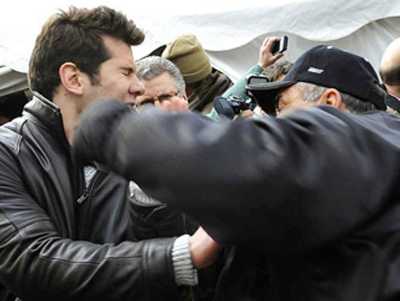 Do you also recall NOT seeing this reported on the Nightly News?

Well, that’s ’cause the Media had to come up with some reason to not air it, since it made their side (Liberal Democrat cronies, aka Unions) look bad.

Ed over at Hotair says it perfectly:

“After the video of the attack first appeared, Steven’s critics insisted that he had edited the videotape to either make the union protesters look bad or hide evidence of his own provocative behavior.

In response, Steven has released all of his raw video footage of the protests that day.

Okay, I’ll wait here patiently for ABC, CBS, and NBC to lead off their telecasts tonight with this.

2 responses to “New, unedited video of Unions’ assault on Steven Crowder. Will we see this on the Nightly Newscasts NOW?”