If YOU can say these words: “I’d rather go on Unemployment”, then YOU are the problem

There is a scene in the movie ‘Cinderella Man‘ which never fails to get me misty-eyed. It’s when Russell Crowe’s character, James J. Braddock, begins his inexplicable comeback from penniless dock-worker to Heavyweight champion:

Then, he took on Art Lasky, who had won all but one of
his last 15 fights—yet Braddock dispatched him, too, in a thrilling 15-rounder.

With these remarkable wins, Braddock’s spirit became renewed. Remarkably, one of the first things he did with his earnings was to pay back his Public Relief debt to the government.

Braddock had sacrificed everything for his family: his career, his house, even his pride…attempting to feed and shelter them. He eventually needed help, just a little, to keep going. And as soon as he was able, he repaid that help, in full.

So…., ‘Remarkable’? Is it “remarkable” to pay back a loan he wasn’t “forced” to repay, just because it was the right thing to do? And (especially) judging by today’s standards?

Yeah, it was. Definitely. Because now, our nation doesn’t perceive Government Assistance the same way. It’s now not just for absolute, dire emergencies; it’s for everyone, anytime.

The reason that scene came flooding back to me was a report I heard on the news last night, where some of the Hostess bakers were being interviewed:

“I really can’t afford to not be working, but this is not worth it.

I’d rather go work somewhere else, or draw unemployment,” said Johnson, a worker at Hostess for 23 years.

Those last three words made my head snap around. THIS is what I’ve been meaning when I say we’re now knee-deep in a culture war:

Now, folks with whom I disagree will instinctively go crazy with this example, pointing to the movie AND to the Hostess baker as justifications for even more folks being on government assistance.

Good grief: how many times do I need to include this clip?

This has nothing to do with being heartless: this is about having basic human pride. This is about Need vs. Preference. Some people are in Need of assistance, whether from a charity, or family/friends, or even the government, in order to get back on their feet again.

Hey, bad things happen to good people. Fine, I can agree with that.

Still others are simply mentally/physically incapable of supporting themselves. This is a distinct and tiny minority of our population. But still, fine, I can see that, too.

It’s the ‘Preference’ folks where I draw the line. If you aren’t making enough money, Mr. Johnson-who-worked-at-Hostess-for-23-years, then why didn’t you leave and go somewhere else? Seriously, you expect me to believe you had no other options ….in 23 YEARS?

And now, you expect me to sympathize with your plight when you (A) go on a strike which will cripple your employer and/or (B) you have no problem going on Government Assistance as a result, which means everyone has to pay for you?

Yeah, I have a BIG problem with that.

One of our most vital founding documents, the Declaration of Independence  famously states:

“We hold these truths to be self-evident, that all men are created equal, that they are endowed by their Creator with certain unalienable Rights, that among these are Life, Liberty and the pursuit of Happiness.“

I was taught that the word “pursuit” was one of the most important words in that sentence. ‘Pursuit’ means that nothing is guaranteed, other than the opportunity for happiness.

Once upon a time that was called being honorable; having character.

And, as articulated by Mr. Miller above,  it’s part of what’s vitally missing in our culture today. 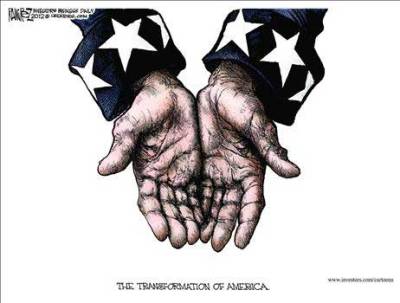 The following ‘Afterburner‘ video (from just over a year ago) also addresses this question and sadly, agrees with me: it’s a lack of character, a lack of virtue & honor. Previous generations simply wouldn’t believe the number of people today seeking more & more benefits for themselves, …on someone else’s dime.

Our fathers, and our father’s fathers, would never have dreamed of such a thing. For many of our neighbors today, however, it IS their dream.

My only question is: how far will we need to fall before, like James J. Braddock, we are willing to start pursuing our dreams again, rather than waiting for a handout?

And will we still have enough character as a nation to do so?

9 responses to “If YOU can say these words: “I’d rather go on Unemployment”, then YOU are the problem”