Regardless of how you feel about the results of last week’s Presidential Election, one thing is clear: elections have consequences.

A Romney/Ryan win was no guarantee of a complete repeal of Obamacare, but an Obama/Biden victory provides certainty of the Administration’s and the Left’s dedication to its complete enactment.

It’s no surprise that the majority of its “less attractive” aspects were delayed until AFTER the election.  There are eighteen new tax hikes associated with the “Patient Protection and Affordable Care Act”.

Even better: ten of those tax hikes haven’t even gone into effect yet. 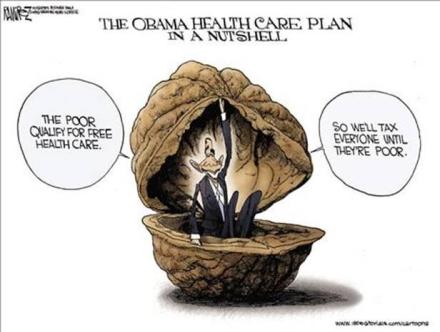 A week or two ago, I did a post here at “Two Heads…..” about the impact of pending and yet-to-be-declared regulations on our economy, and specifically, on employers.  Well, Obamacare is one, big, fat, UGLY, bureaucratic tumor full of new regulations and taxes.

Well, U.S. companies took Nancy at her word, and began digging through the 2000+ pages of this legislative freak-show right after the bill was passed. While many acted prior to the election to put a plan in place, even more held out and waited for the election results. With last week’s re-election of Obama, those plans kicked into gear.

The headline of Kerry Picket’s November 8th article in “The Washington Times” sums it up:

According to that article, Freedom Works has been putting together a list of companies that will lay off employees as a direct result of Obamacare. Here are just a few examples from the article:

Dana Holding Corp, a Global auto parts manufacturer in Ohio:  Layoffs planned to compensate for the $24 MILLION cost of compliance with Obamacare over the next 6 years.

Sadly, this is a PARTIAL list, and it’s growing day by day…….literally.

And, as our dear friends at “The Heritage Foundation” point out, questions STILL remain.  Among the MANY, here are just a few:

“Thankfully, this isn’t the end of the story. Obamacare is not here to stay.

Despite the 2012 election, the assumption that the health care law will stay on course is another example of the left’s wishful thinking. Of course, efforts for a complete repeal will likely face the same fate as efforts in the last Congress did.

But there are ample reasons, as well as opportunities, to change the course of this law.”

I encourage you to read their piece on where they see these opportunities existing.

So, while the election may be over, the fight to dismantle, re-frame, & present a more attractive alternative still exists. One thing is for sure: It’s going to take all of our concerted efforts as Conservatives and business-thinking citizens to keep up the pressure on our elected officials. 19 responses to “‘Obamacare’: even WORSE than predicted, but the fight isn’t over yet”