Teachers, Tenure, …and our Kids

Since school is starting up again, this topic is timely ….at least in my house.

Most of us are aware of the problems inherent with public school teachers and tenure: once tenured, too many teachers are not fulfilling their basic obligations. Many need to be retrained or simply let go. However, their tenured status makes them almost impossible to fire, and the unions won’t hear of it. It’s all about power: being able to fire bad teachers could eventually lead to a merit system and once that is in place, …bye-bye union.

However, there was a recent article in the New York Times about an unusual occurrence in NYC. Seems that almost half of that city’s teachers didn’t get tenure in their first shot at it. It also appears that, amazingly, this was on purpose:

Nearly half of New York City teachers reaching the end of their probations were denied tenure this year, the Education Department said on Friday, marking the culmination of years of efforts toward Mayor Michael R. Bloomberg’s goal to end “tenure as we know it.”

Only 55 percent of eligible teachers, having worked for at least three years, earned tenure in 2012, …compared with 97 percent in 2007.

Jazz Shaw over on HotAir.com had something to say about this:

“This is an interesting trend which may be sending a message to the teachers’ unions, but it’s not a long-term solution. Teachers failing to receive tenure are simply given another season or two to get it or they drop out. The end goal for all of them – and the unions – is still to land tenure so they can stay on indefinitely on the taxpayer dime once they get it.

It’s no surprise that unions would be pushing back against this. We’re talking about a group which also fights like the devil against the idea of things like merit pay, despite the fact that studies show that it works. It’s a culture unlike virtually any other in the nation, where outrage greets the idea that competition for a job should result in the best candidates and that pay might be linked to performance.”

Jazz is right: instead of proficiency or mastery of the job, far too many teachers have tenure as their #1 goal. It has been more of a hot-button topic for the past few years, though, helped along not insignificantly by Governor Chris Christie of New Jersey:

Gov. Christie just signed a teacher’s tenure reform bill into law a couple weeks back, which ended the “job-for-life” thinking he spoke of in the video. This new law is another gigantic step towards reclaiming control of our children’s education, and wresting it away from the unions. We could stand to see similar bills pop up across the country. 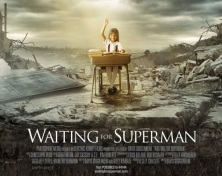 THE major obstacle is, of course, the teacher’s unions. Anyone who has worked for the public school system knows how they work. For everyone else, you can get the general idea by watching the film ‘Waiting For Superman’, which was released in 2010. Since it only grossed about $6 million stateside, there’s a safe bet that most folks reading this did NOT see it, though…and you need to.

‘Waiting For Superman’ was directed by admittedly left-leaning Davis Guggenheim, director of Al Gore’s ‘An Inconvenient Truth’. However, Guggenheim is highly critical of the hundreds and hundreds of “failure factories” which dot the landscape, and he saves special disdain for the teacher’s unions themselves, which are preventing the necessary changes to be made for the betterment of the students.

Trust me: you will never again be able to hear the phrase, “It’s for the children” without thinking of this particular film.

Even though my wife and I don’t have kids in public school (we home school), we couldn’t help but be moved to tears at the plights of these families. The parents’ dogged determination to secure even a decent education for their daughters and sons, and the massive hurdles which keep being placed in their way, is heartrending. In only 90 minutes, you will possess a deeper understanding of just how important these changes in tenure in New York and New Jersey truly are, because the findings in ‘Waiting For Superman’ are being played out, right in front of our eyes.

14 responses to “Teachers, Tenure, …and our Kids”