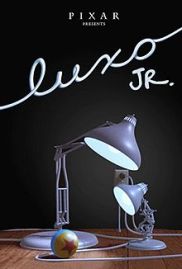 I only vaguely recalled ever seeing this originally, so I did some time-consuming and extensive research (…OK, I Googled it…) and found the following:

Luxo Jr. is the first film produced in 1986 by Pixar Animation Studios, following its establishment as an independent film studio. It is a computer-animated short film (two and a half minutes, including credits), demonstrating the kind of things the newly-established company was capable of producing. It was the second Pixar short to release with a Pixar film (Toy Story 2, in 1999) after Geri’s Game was released with A Bug’s Life in 1998.

It is the source of the small hopping desk lamp included in Pixar’s corporate logo. In a subsequent re-release after Pixar became popular, a pretext was added to the film reading, “In 1986 Pixar produced its first film. This is why we have a hopping lamp in our logo.”

This certainly does capture the magic of the Pixar studio, even back then. If you can give life, emotion and personality to a pair of desk lamps, ….well, you’re pretty darn special.

This entry was posted in fun and tagged entertainment, movies, Pixar. Bookmark the permalink.