We touched on this last week, but Marco Rubio has been working on this problem for months now. If you didn’t hear his quote from last night, here it is:

OK, no surprise to us. We know that Obama divides on purpose, and that he actively seeks to pit one group against another. But I think Marco misses something here.

Look at what he says again:

“He deliberately divides Americans against each other for purposes of political gain,” Rubio said.

Rubio may be correct that “pit(ting) one group of Americans against another” is common in politics, but common with whom? Progressives/Liberals, of course. That’s their brand of politics, and it’s one that Obama uses with their implicit blessing: 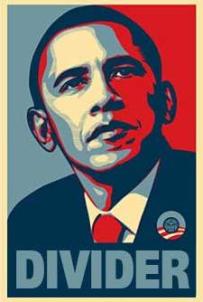 Do all of THOSE topics divide people? Absolutely. I’d put Obama’s Gestapo-ish EPA among the absolute worst offenders, choosing enviro-weenies over the country time-and-again.

And now you have this utter disregard of the law which is breath-taking.

Charles Krauthammer actually summed it up pretty well over the weekend:

“Beyond the pandering, beyond the politics, beyond the process is simple constitutional decency. This is out-and-out lawlessness. You had a clip of the president himself say months ago ‘I cannot do this on my own because there are laws on the books.’ Well, I have news for the president: The laws remain on the books, they haven’t changed”.

So Rubio had it right, as far as he went. But Obama is intent on going much further than that, and I wouldn’t put anything past him now.