The Wisconsin recall election is today. If you live in Wisconsin, please be sure to vote!

**Unless you’re voting for Democrat Tom Barrett: his election is tomorrow.

Story #1: I heard about this from Mark Belling over the weekend, but didn’t think about it again until now. A former Marine by the name of David Willoughby  was at an anti-Walker rally. Willoughby is a Walker supporter, and from what I can tell wasn’t causing a disturbance, other than being the recipient of barbs, threats and yelling from the anti-Walker crowd. And for his troubles, he got arrested.

Story #2: This is from over a week ago, but it didn’t get ANY oxygen the first time around in the media. Ever since Scott Walker began to follow-through on his campaign promises to save jobs & money by abridging some of the public sector union’s bargaining rights, we’ve all witnessed the union’s Sturm und Drang. You know the spiel: Walker’s measures would shut down the state; towns would lose their teachers and their schools; Walker hates children; Walker wants working people to starve. You know, the normal stuff said about Conservatives.

Well, a little cited poll came back in May and guess what?

“….now that they have seen its benefits—most Wisconsin voters want to keep it. By a 53 percent to 38 percent margin, independent voters favor the limits on collective bargaining in government. It turns out that closing a $3.6 billion deficit without raising taxes or laying off teachers is popular after all.”

Just remember: this election is a battle between the oppressed and the powerful: 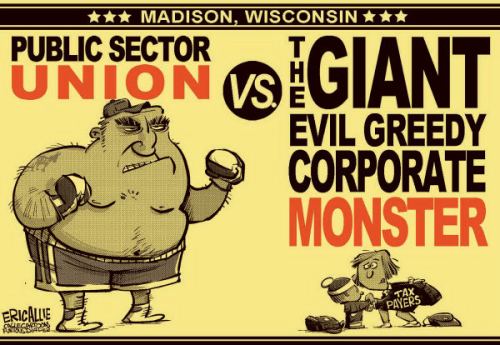