Have you noticed that Arizona seems to get just a weeeee more attention from the Federal Government than anybody else? It’s almost like they’re being told, “Hey, nice state youse got here. Be a shame if sumthin happened to it….”

Several weeks back, we covered a totally wacko case where the Federal Government wouldn’t allow Tombstone, AZ to use modern technology to repair damage to the town (“Have a Nice Day!“). We’ve all watched the ongoing immigration battle. Plus President Thin-Skin isn’t exactly best buddies with Governor Jan Brewer. And there’s the whole Fast N’ Furious thing. And Sheriff Joe Arpaio is probably not on the White House Christmas Card list, either.

And even with all that, …..this is crazy.

A new state law and a bill introduced in Congress are meant to defend Arizona agencies from being punished for federal dust-pollution violations stemming from massive natural dust events, such as haboobs.

Failure to prove compliance with federal air-quality standards could jeopardize federal funding for transportation projects in the state.

The new law ensures each city, town and county documents whether they are in compliance with EPA standards.

…U.S. Rep. Jeff Flake has (also) introduced a bill in the U.S. House of Representatives intended to help states prove more efficiently and effectively that their violations of dust-pollution standards qualify as “exceptional events” — meaning that while proper controls are in place, violations still occur because of natural events beyond a state’s control.

“It’s pretty severe,” Flake said. “This is something that I think everyone recognizes — Republican or Democrat — that it’s just bureaucracy run amok. And we’ve gotta fix it.”

OK, so Arizona, which is largely made up of desert, is having to defend itself from our oh-so-benevolent Federal Government, which is trying to cite them for…..dust violations??? 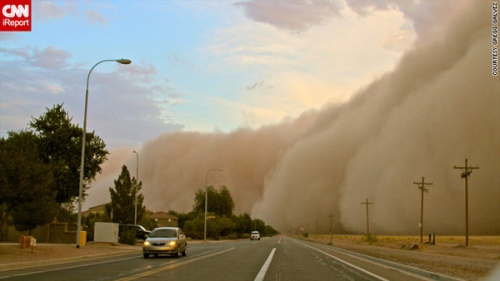 The massive dust storms that rolled through the Valley in 2011 have led to a record number of dust-pollution violations at air-quality monitors across Maricopa County. In many cases, multiple violations happened on the same day, but at different monitor locations.

Just when I think they can’t shock me anymore, they do it.

So what’s next: the Feds punishing Colorado because their mountains are too tall and they aren’t Americans with Disabilities Act compliant? Or maybe finding Montana excessively forested (exceeding Federal forest fire risk tolerances)? Or maybe Kansas should be punished next, since they don’t have enough trees, and thusly aren’t “doing their fair share” in the fight against CO2?

Really, I have only two concerns at this point.

Hey, it’s no crazier than trying to regulate dust storms.

10 responses to “Arizona vs. the United States Government — again”