Put WHO in the zoo?

[Note:  Although “two heads are better than one,” my brother has been ably holding down the fort “single-headedly” for the past two weeks.  I’m hoping to have more of a presence here in future.  Today’s post is an apt illustration of the fact that fodder for blogs can be found anywhere…] 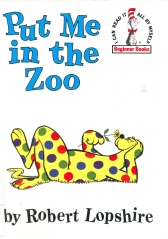 One of my granddaughter Lucy’s favorite books is Put Me In the Zoo, the story of a fantastical creature with large spots which change shape and color.  He visits the zoo, sees the animals being groomed and fed and generally pampered, and wonders why he can’t live there, too.

Lucy loves animals and I was counting the days last month until our local zoo opening.  We’ve visited at least five times so far…including twice this week.

We are fortunate to live in the same town as the Fort Wayne Children’s Zoo, which has been voted one of the ten best zoos in the country.  With a huge African Journey section, (which includes a herd of giraffes that come to a viewing station where we can actually feed them!); Indonesian Rain Forest (tigers and orangutans, among other delights); Australian Adventure (walk-through aviary and kangaroo areas); and model Indiana Farm, this zoo is not only beautiful but focuses intentionally on educating all its visitors.

All this is also very expensive, both to build and to maintain.  I was surprised and impressed to learn recently that our zoo is a not-for-profit that receives no tax dollars.  It is supported by the sale of admissions, memberships, rides, and generous gifts from donors in our community.

Despite being a full-time “Gramma”  who makes frequent trips to the zoo, I do manage to continue my volunteerism.  I’ve worked for a faith-based social service agency for almost three years now:  Inasmuch has taught me that there are two basic kinds of poverty: situational–which we see more and more nowadays, with people being laid off and seeking charity for the first time–and generational, where people are born into a lifestyle which seems normative, and which they can’t  imagine escaping.   Food stamps, WIC vouchers, Medicaid and public housing are the rule for those entrenched in generational poverty.

Among other things I’ve learned, I know now that there are rigorous criteria for an apartment or house being accepted as a Section 8 dwelling.  Here in Fort Wayne the portion of the document which defines acceptable living conditions runs to 26 single-spaced pages.  Besides sanitary and safety concerns (including 8 full pages on lead-based paint), even the number of required bedrooms is specified:  “The dwelling unit must have at least one bedroom or living/sleeping room for each two persons. Children of opposite sex, other than very young children, may not be required to occupy the same bedroom or living/sleeping room.” I wonder who decided that this was a basic requirement?  I personally know of many families in this town who raised 8 or more children in three-bedroom homes.  Under the FWHA rules, even a family with three girls and two boys would need four bedrooms because 3 girls couldn’t share, regardless of the size of the room.

A part of me is proud that we show such detailed care and concern for even our poorest citizens, making sure that if the government is going to pay for it, that it is clean and safe.   But there’s another part of me which wonders if all that we do for those who live in poverty is self-defeating.  Is it possible to make things too comfortable for those who have no current means of supporting themselves?   If I were living in a cardboard box in Mexico City, a lean-to in Port-au-Prince or a Rwandan refugee camp in Zaire…

I would think of nothing but how to better myself and get out of there.   And yet, betterment in such places is often next-to-impossible, unlikely here–by comparison to so much of the world, we are still the Land of Opportunity.  The impoverished third world has inspired the creation of micro-lenders such as the Grameen Bank and  Kiva.org, who provide small amounts of money to hard-working entrepreneurs for the goals of  becoming self-sufficient, moving out of extreme poverty and into a higher standard of living.

Instead, here in the US if you have nothing then you can be given everything–free housing, free utilities, and free food (about $150 in food stamps per month, per person, if your net income is $0).   And, unlike unemployment benefits, which require that one at least go through the motions of job-hunting, many or all of the resources provided for the indigent are provided with no strings attached.

Is it merely offensive and politically incorrect of me to point out that this turns people into less than zoo animals?  Consider:  the inmates of your local zoo earn their keep by providing both entertainment and education to the general public and to scientists.  (The creature in Put Me in the Zoo moans, “Oh, they would put me in the zoo if they could see what I can do!”)  Most were raised in captivity and will never know any other life.  All their needs are provided for, completely and regularly.  Releasing them back into their native habitat would be disastrous.  In return for the comforts of zoo life, we only ask that they be viewed and studied.  And we pay for the privilege, voluntarily.

Likewise those who have been lulled into the complacency of government dependence–who is requiring them to extricate themselves from the system?  What incentive does someone have to get an entry-level job, when it may mean that their standard of living actually decreases?  On the other hand, what do they contribute in return for this maintenance?  The programs that are supporting them are paid for by those who are already struggling to fend for themselves, and who are not necessarily complicit in the way their tax dollars are spent.  Other than keeping families out from under bridges, what benefit  is it to the average wage  slave that a much poorer family can live comfortably–indefinitely–without earning any income of their own?

UNFIT TO SURVIVE IN THE WILD